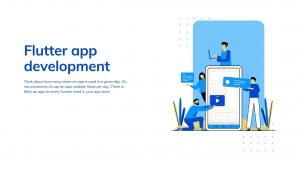 Think about how many times an app is used in a given day. It’s not uncommon to use an app multiple times per day. There is likely an app for every human need in your app store. It is therefore not surprising that mobile apps have seen a steady increase in demand since the invention of the smartphone.

Mobile application development, as you might know, is the process of developing software apps that run on mobile devices. A typical mobile app uses a network connection to communicate with remote computing resources. Flutter is an open-source UI software tool development kit, created by Google. It can be used to create cross-platform applications for Android, iOS and Linux as well as Mac, Windows, Linux, Mac, Windows and Google Fuchsia from one codebase. It’s a complete environment that includes a framework, widgets and tools which allows you to efficiently develop mobile apps.

Flutter is a faster and more dynamic mobile app development for developers. Flutter allows you to make changes in code and immediately see them in the app which is called Hot reload. It takes only a few seconds and allows teams to add features, fix bugs and experiment faster. This is a Flutter feature that every top Flutter app developer team loves.

Developers create one codebase that covers your 2 apps on both Android and iOS. Flutter is independent of the platform because it uses its widgets. This allows you to have the same app across two platforms. It’s not impossible to differentiate apps.

It is easier to test the same app on 2 different platforms. Quality Assurance can be more efficient. The developers only need to write one set of tests per codebase. Quality Assurance specialists can focus on one app, which means they have less work. However, apps with differences need to be tested on both platforms.

Flutter has won the hearts of developers around the world since the release of stable version 1.0. Flutter is a robust and ambitious mobile app development SDK from Google that allows developers to target both iOS AND Android platforms with one code. Flutter’s compatibility with Google Fuchsia OS makes it even more attractive.

The mobile app market is moving towards a user-driven, app development process. This is where the greatest obstacle lies: its division in android and iOS app development. Both operating systems have many users around the globe. Entrepreneurs cannot ignore any of these operating systems while reaching a large audience. The brand experience could suffer if you don’t include any of these OS.

Importance of Digital Marketing in 2021